Despite our late night, we were up in good time to break camp and head for Aswan. So, after a hearty breakfast of ice-cold watermelon (which we had bought on the road from Cairo) and treats from a local bakery, we were on our way.

It was a relatively short drive (in comparison with the previous day) and we arrived in Aswan by mid-afternoon. The drive mostly followed the Nile, so the scenery was fairly lush and it was pleasant.

However as we approached our destination I could hear Ben’s teeth begin to grind. The local authorities had sensibly built frequent speed bumps to regulate speed; they also seemed to have hidden the bumps in shadowy bits of the road so that they took you by surprise for maximum impact. On top of this, they were also double bumps (two – right beside one another) which meant that going over them at the ohs**twheredidthatcomefrom?! speed of 40 or 50kmph was like driving over a pneumatic drill. 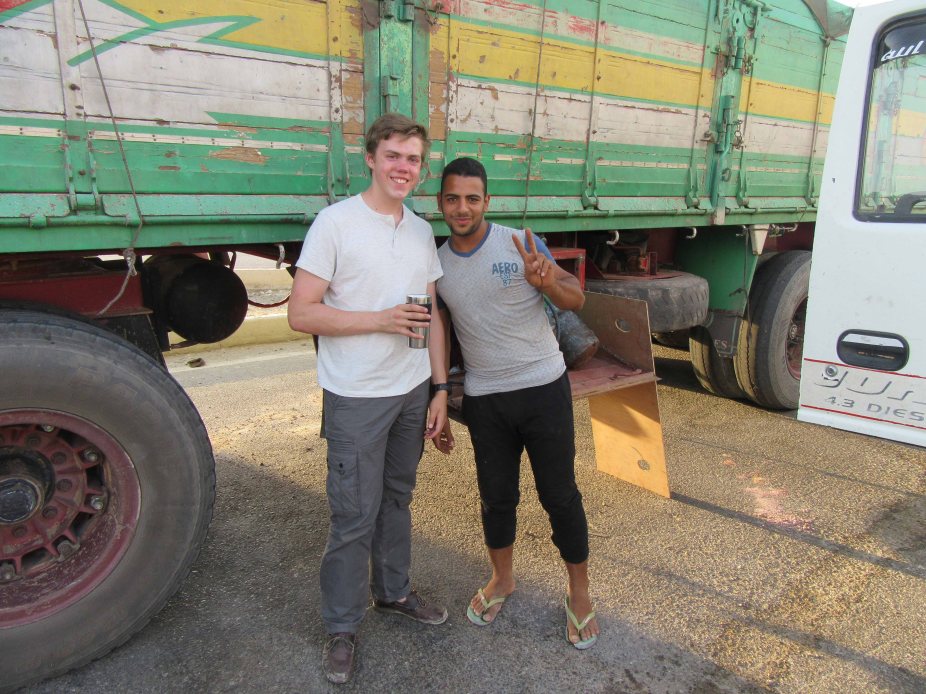 Making Nubian tea with a group of truckers enroute to Aswan

This was why Ben’s teeth were grinding. It was as if, every time I ploughed into another set of bumps, Ben could feel the impact reverberating through his precious shock absorbers (which you definitely could…they were big bumps and I can’t imagine what it was like for the shocks).

Melvin pulled through though and we arrived at Adam’s House, our campsite, where we cooked a tasty dinner of pasta, pesto, and fried aubergine (eggplant) with fresh lemon and pepper before hitting the hay.

This is a text widget. The Text Widget allows you to add text or HTML to your sidebar. You can use a text widget to display text, links, images, HTML, or a combination of these. Edit them in the Widget section of the Customizer.
%d bloggers like this: