Until the Thursday before last it was our intention that Melvin would be shipped to Alexandria from Felixstowe, with agents Sea Kargo. However, whilst on the phone to Sea Kargo, the day after dropping the car off at the port in Felixstowe, they eventually decided to inform me they had never actually booked the container onto the planned vessel, despite weeks of notice and allowing me to drop Melvin off! As you can imagine I was livid and therefore based on my experiences and the quality of service I received from Sea Kargo, personally I have no confidence in recommending them to anyone.

With flights already booked to Cairo and a shipping palaver emerging, a new plan was quickly formulated with the help of Dannie at Seabrook (www.seabrook.com), however, in order to not lose another week in Africa the fastest vessel to Alexandria departed from Antwerp in Belgium giving Melvin his first opportunity to embark on a road trip.

En-route to Antwerp my brother and I visited Tyne Cot and Lijsenthoek, two war memorials, before venturing over to the Netherland/Germany border to stay with some family friends.

We then returned to Belgium and met Kirsten and Derek at Carlogin (www.cargologin.com) and said our fair wells to Melvin – the next time we’ll see him will be in Alexandria, Egypt.

Derek from Cargologin at Antwerp, and Melvin.

The warehouse in which we dropped Melvin off was an Aladdin’s cave of vintage cars stored until they reach a certain age at which the import tax reduces significantly. 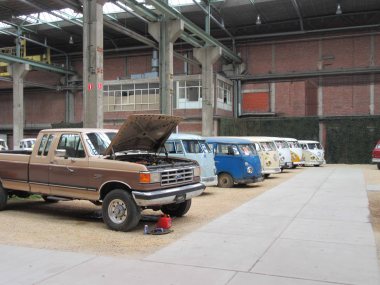 The surprise collection of cars at Cargologin, where we left Melvin!

Having dropped off the car, our attention soon focused on formulating the next plan – how to get back to the UK on a budget! Derek from Cargologic very kindly offered us a lift to the station in Antwerp where we caught a train to Lille. However, upon arriving at 7pm, we soon discovered we had a 5 hour wait until the next ‘Oui-bus’ departed for London Victoria Bus station. Luckily the station had some entertainment available which included a table football table from the Euros that allowed for a close fought battle, which inevitably I won (61-43). However, the highlight for me was definitely serenading the station (to boredom) on a public piano with a 30 minute recital, of the first eight bars of Fur Elise!

As Melvin has 4 jerry cans and a roof tent, the height of the vehicle is 2.56m. As a result Melvin would not fit into a standard sized 20ft container and hence I decided to arrange a high cube (HC) container, so I would not have to strip and re-assemble Melvin in Alexandria. I would liked to have booked a 20ft HC container, however they seem rarer than first editions of the bible in the shipping world, so I had to settle for a 40ft HC, which was only fractionally more expensive than the 20ft HC, and well worth the expense in my opinion. Roll on Roll off (RORO) was not an option as the car was not ’empty’.

This is a text widget. The Text Widget allows you to add text or HTML to your sidebar. You can use a text widget to display text, links, images, HTML, or a combination of these. Edit them in the Widget section of the Customizer.
Loading Comments...
%d bloggers like this: